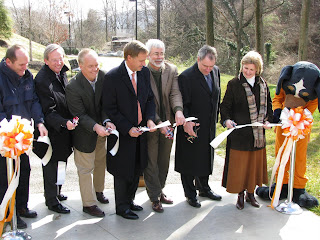 Mayor Bill Haslam and Interim University of Tennessee Chancellor Jan Simek will join others in opening the new Second Creek greenway on Thur, Feb. 28 at 2 p.m. across the street from the Bridgeview Grill beside Neyland Stadium. This greenway restores a path connecting World's Fair Park to the Tennessee River along Second Creek.

The new greenway extension connects to World's Fair Park across Cumberland Avenue either by crosswalk at street level or by the pedestrian bridge. People can reach Neyland Greenway and Volunteer Landing via Second Creek Greenway by either taking the tunnel under Neyland Dr. or the crosswalk at the street level.

Haslam also noted that the City has plans to eventually extend Second Creek Greenway from the northern end of World's Fair Park into the Old City. People attending the Second Creek Greenway ribbon cutting may park at the lower parking lot on Cumberland Ave. across the street from the Convention Center. (ed. note: you could also bike or walk there!)
Posted by kelley

A group of local cyclists is planning on attending this event. We want Mayor Haslam, Chancellor Simek, and other officials who may attend to see our support for the continued addition of new sections of greenway.

All local cyclists are invited to join us!

We are meeting at the site of the ceremony at about 1:45PM. If the weather cooperates, a few of us hope to enjoy a relaxed paced greenway ride after the ceremony. All who attend the ribbon cutting are invited for the greenway ride. Route and length of ride are TBD.