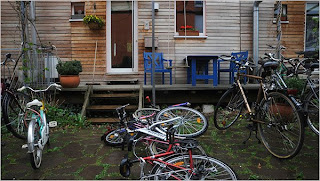 In German Suburb, Life Goes On Without Cars
By ELISABETH ROSENTHAL
Published: May 11, 2009 =
Residents of this upscale community are suburban pioneers, going where few soccer moms or commuting executives have ever gone before: they have given up their cars.
Street parking, driveways and home garages are generally forbidden in this experimental new district on the outskirts of Freiburg, near the French and Swiss borders. Vauban’s streets are completely “car-free” — except the main thoroughfare, where the tram to downtown Freiburg runs, and a few streets on one edge of the community. Car ownership is allowed, but there are only two places to park — large garages at the edge of the development, where a car-owner buys a space, for $40,000, along with a home.
As a result, 70 percent of Vauban’s families do not own cars, and 57 percent sold a car to move here. “When I had a car I was always tense. I’m much happier this way,” said Heidrun Walter, a media trainer and mother of two, as she walked verdant streets where the swish of bicycles and the chatter of wandering children drown out the occasional distant motor.
Full article at http://www.nytimes.com/2009/05/12/science/earth/12suburb.html?_r=2&pagewanted=1&em
Posted by kelley