Do you bike to a business that doesn't have bike parking? We have a grant program that pays 80% of the cost of racks. We also have handy cards that you can print, sign and give to the manager/owner to let them know you'd like a place to lock your bike.
http://www.knoxtrans.org/plans/bikeparking/index.htm
Posted by kelley No comments:

What are we up to? 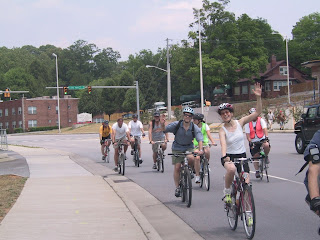 2007 was a great success. We had more than 140 people commute by bike at least twice during Bike to Work Week in May. The new Knoxville By Cycle summer ride series had 50 - 75 people participating each month. We had beautiful weather and wonderful welcomes from the Zoo, Town Hall East, and the Botanical Gardens for the 7th annual Neighborhood Bike Ride. And our first Tour de Lights ride in December was incredible. I never in a million years expected 200 people to show up with their bikes decorated, much less for people to come in full costume! 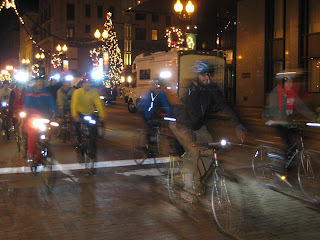 We're in the midst of planning for Smart Trips Month this May. There will be tons of bike-related things going on. Look for a bike ride as part of the Get Outdoors Festival on May 17th at World's Fair Park. The third annual Pedal Vs. Metal Race will have two bicyclists competing against a motorist to complete three errands (bicyclists have won the past two years!). And there will be a bike commuter booth at the downtown Farmers' Market every Wed in May. We'll have a schedule of events ready by late March/early April.
Posted by kelley 3 comments: