Tour de Lights despite the drizzle

Tour de Lights despite the drizzle 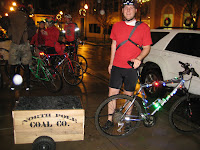 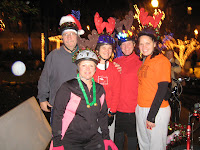 I didn't expect many people to show up, but they kept rolling in! I think we had between 100 and 150 bicyclists. It was great to see everyone with their lights, tinsel and costumes. Ryan, of course, had put tons of work into his trailer--a container of coal! (Ryan, you won a gift basket from Mast General--congrats, and just stop by there to pick it up downstairs!) There was also a huge gift-wrapped box that produced fog. Andie had a whole Nutcracker theme going on, and Shelaugh was Ms. Claus.

We enjoyed treats from Rita's before the ride, along with bike safety checks by Harper's and Fountain City Pedaler. After the ride, Mast General provided hot cocoa and cookies. Prizes for best decorations were donated by Mast General, Tomato Head and Rita's. It is so great to have support from our local businesses. And much thanks to KPD for their help with traffic control.

Hopefully the weather will be better next year. I can't wait to see what costumes and decorations there are for the 3rd annual ride! It just gets better and better.
Posted by kelley 2 comments: 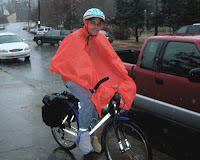 Commuting in the Rain on a Budget
By Brian Miller
For the last year, I've cycled to work about 80% of the time. From time to time, I get caught in the rain at the office, and either wait for a break in the rain or just get wet and change when I get home. Getting motivated to get on my bike in the rain on the way TO work is another matter... especially when there's a perfectly good car sitting in my driveway. Today, I broke that trend. Rain cycling on a budget?
Try a $2 rain parka, and old bike tube, two plastic shopping bags, and a baseball cap (for those of us who wear glasses).
I cut up an old bike tube and used it like a belt to tie the back side of the parka around my waist. This gave me extra protection from the water while preventing the back from flapping in the wind like a giant flag.
The front of the parka drapes nicely over the handlebars, covering my arms and hands. It also provides a big "roof" over my legs, keeping them relatively dry as well.
The plastic bags cover the shoes. You can fasten them with a rubber band or just tie them around your ankles as I did.
.....
Full story and photos at http://www.smwbike.org/commuting/rainbike.html
Posted by kelley No comments: 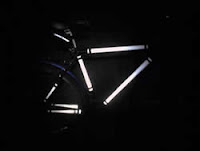 Okay, so it doesn't really "glow," but it sure kicks up some light... at night and in the rain. It took me a while to embrace the idea of covering my classic Bridgestone (it was their entry-level mountain bike before I "commutified" it) with 3M reflective tape, but I'm glad I did.
Previously, I had bought some regular reflective tape, but it was too narrow (only about 1/2" wide), which is good for detailing, but not good for all-out wrapping. I did use the narrow tape to make accents on my helmet though.
What I finally found that worked for the bike was 4" wide tape made by 3M and sold by the foot at VersaLift. It's only about $1.50 / foot and I used about 4 or 5 feet of tape. I used white tape on my black bike, but they also sell blue and red at VersaLift. You can buy just about any color though if you shop around.
....
Full story and more photos at http://www.smwbike.org/commuting/glowbike.html
Posted by kelley No comments:

From Ryan Cooper:
I faced the same problem that I'm sure many avid cyclists have- "Where do I put all these bikes?!" I have a mountain bike, a commuter/utility bike, a fixed gear, a bike polo bike, and my wife's hybrid bike too. I used to keep them piled in my basement but every time I wanted to ride a specific bike I had to move 3 other bikes out of the way to get to the one I wanted.
I knew there had to be a solution but my searches for a storage solution were nearly fruitless. I found several different styles of bike racks online but everyhting I found shared 2 common elements. They were all overpriced (generally $200+ if I hoped to store 5 or more bikes), and they did not appear to offer much in the way of space savings over my current method. I knew there had to be a better and cheaper solution. I keep a couple 18"x24" whiteboards in my garage because I'm a visual person who needs to see things to fully understand them. I spent a few evenings in my basement with a tape measure and my whiteboards measuring the bikes and the room and sketching designs. After many scrapped ideas, I settled on a modified A Frame design that would be pretty easy to make with basic tools. I loved this design because it could store 5 bikes in the space of 3 without compromising the ability to get to any bike at any time. A $25 trip to the hardware store later I was ready to start building.
It came together pretty easily and now that it's complete the rack works just like I'd hoped. 3 bikes on the bottom and 2 bikes on the upper level with space for the future addition of a shelf inside the "A" frames to store a bike pump, chain lube, and some spare tubes. The upper bikes stay in place just fine but I did add bungee cords to secure them just in case of an unexpected earthquake or Godzilla attack.
It's not the prettiest piece of furniture I own, but it gets the job done and for 1/8 of what I would have spent on a ready-made unit I'm happy.
Posted by kelley No comments:

Link found between 'active transportation' and less obesity in 17 countries

KNOXVILLE, Tenn. - Jim Richards is no kid, but he loves to ride his bike. At 51, he has become a cycling commuter, pedaling 11 miles from his home in the suburbs to his job in downtown Knoxville.

"It really doesn't take that much longer" than driving, he insists.
And he gets 40 minutes of exercise twice a day without going to the gym, which he attributes to a 20-pound weight loss.

Posted by kelley No comments:

The singing's pretty bad, but the message is oh so important: be visible when cycling.

And a warning for those with delicate sensibilities: the video is just a little bit risque.

Thanks to the Vancouver Area Cycling Coalition, Momentum Magazine, and the B:C:Clettes for making the video.

Turn on your lights, everybody!
Posted by Ellen Z. No comments:

Join us for the second annual Tour de Lights!

Experience the beautiful holiday lights of Island Home and downtown by bicycle. Meet at Krutch Park for the Tour de Lights, sponsored by the City of Knoxville and the TPO Bicycle Program. Free bicycle safety checks start at 6 p.m., until the ride leaves. Hot chocolate and cookies will be provided after the ride by the Mast General Store. The ride will be less than 6 miles and does not have many hills.

Prizes will be awarded to ride participants for best decorated person, best decorated bicycle and best decorated helmet. Riders should get creative with specialty bike lights or battery-powered LED lights. All ages are welcome. Helmets are required along with a white front light visible from 500 feet and a red rear reflector. Rear lights are recommended.
www.knoxtrans.org for more info
Posted by kelley No comments:

Knoxville's first bicycling guidebook was worth the wait. Now available in area bike shops and book stores, "Bicycle Routes" includes route descriptions of 40 of the best scenic rides around Knoxville. The book covers a nine-county radius and includes maps as well as some wonderfully clever photography, courtesy of the author, Elle Colquitt.

As past president of the Smoky Mountain Wheelmen, Colquitt saw the need for a guidebook dedicated to Knoxville's cycling routes. The result is "Bicycle Routes," a reference tool that will be invaluable to local cyclists as well as to visitors from out of town.

The start locations and routes are color-coded for easy reference, and each route description is accompanied by a map marking the stores and restrooms along the way. Knoxville cyclist Jon Livengood did the maps and deserves credit for making them detailed and accurate, yet easy to read.

Colquitt spent one year researching and compiling "Bicycle Routes." She cycled 4,300 miles and always carried a camera. Her color photographs offer a veritable travelogue of East Tennessee's back roads as seen from a bike. Local cyclists likely will recognize some of Colquitt's eye-catching images, whether they be license plate sculptures, totem poles or a herd of bison grazing next to a rural road.

The cycling routes profiled in the guide book range in distance from 20 to 65 miles. Alternate start locations are suggested for each route, and whenever feasible, Colquitt includes directions on how to access the route from downtown Knoxville. Elevation gains and route profiles are provided to help the cyclist determine a route's degree of difficulty. In choosing routes for the guidebook, Colquitt looked for roads that were scenic and free of heavy traffic. She cycled every inch of road covered in the guidebook and came away with a few favorites.

Posted by kelley No comments:

They opened while I was out, so apologies for late notice. Bike shops are opening as car dealerships are closing. Hmmm....