We had 50 people respond to the post-bike ride survey. The overview of the results is here http://www.knoxtrans.org/bikeride/2010/survey_results.pdf

We had many comments and I wanted to offer a response to some of them. First of all, thanks for all the positive ones! We are glad you had fun and we did, too!

Several people, as they do every year, wonder why we can't do these rides more often. There are a few different reasons. One is that I don't think people grasp how much effort goes into this one ride. It may seem simple to pull off, but it's a lot of work. We have some great volunteers but they have full-time jobs so it would be impossible to ask them to do something every month. Another reason is that we tried having monthly rides for two summers (remember the Knoxville By Cycle series?). It was fun, but a lot of work, and we only had about 30 - 60 people each month. The Bicycle Advisory Committee discussed it, and considering the amount of effort it took to do the series, we decided to concentrate on the two rides that got the most turn-out. So we have the NBR and the Tour de Lights. We love having big events, but we are working on a lot of other programs and projects to make bicycling safer and better in our community, so we need to be sure we leave time and energy to work on those as well. See http://www.knoxtrans.org/plans/bikeprog.htm for more info on our other efforts.

We had a comment or two about the location this year. Someone said we should pick a less busy date so that we could go back to downtown. Maybe they don't realize this, but there is not a less busy option on Saturday anymore! Farmers' Market takes up Market Square and Market Street, which is terrific, but meant we were pushed down to the block between Clinch and Church. In addition to Farmers Market, there were several other downtown events going on that morning because it was an away game weekend. Many people do drive to the ride's start, and it's difficult for them to get themselves, their kids and their bikes/trailers from the parking garages or parking spaces through all the crowds and booths to where we are. We cannot have the ride on a home game weekend because we need KPD support and they are slightly busy on home game days. That's why all the other events happen on away game weekends as well. I really did think that Happy Hollerpalooza would have been more obvious by the time we got back to the start location so that people would have stuck around and joined in the fun. But one reason everyone took off immediately after the ride could have been that they were scheduled for one of the many other activities going on that day!

No one really complained about missing the after-ride pizza, other than wishing for something to get people to stay and socialize. I'll just say that the reasoning behind not having pizza was not wanting to step on toes of the businessnes in the vicinity by offering free lunch instead of urging people to patronize them. That's why we came up with the discount card idea.

Another comment was that we should have an optional longer route. We tried this in the past and it didn't work very well. The main point is that there are many, many bike rides to choose from that are more than 10 - 15 miles long. We were trying to have a ride friendly to casual bicyclists, which is really rare. The point is to have a large group of bicyclists out seeing parts of the city they don't usually see, be together on the roads to send a message to the public that there is support for bicycling, and have fun. If bike clubs want to have a longer ride after ours as an option, they are more than welcome to. When we decided to drop the summer ride series, I invited the clubs to take over, but that hasn't happened. That's a pretty good indication to me that they recognize the amount of effort it takes to make these events happen.


After 10 years, we have done the routes from downtown several times, so one idea for upcoming years would be to start in a different part of the city and be able to see different neighborhoods that we could never reach from downtown. What does everyone think about that?
Posted by kelley 7 comments: 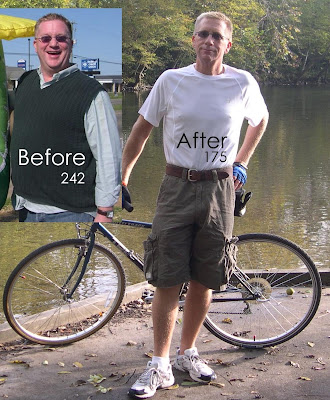 We just heard about Bill, who lost more than 65 pounds by getting on a bicycle! In his own words:
My bicycle was purchased and "stored in the garage" for three years. Following a negative doctor's visit, I decided changes had to be made. No magic pill, ointment, or procedure...I just decided to do what I've heard countless times: "Eat right, and exercise." I fell in love with biking while visiting area neighborhood parks & trails. Each trail offers its own spin to my healthier lifestyle. What I enjoy about biking is that it continues to challenge as I mature as a biker. Hills are no longer barriers, but challenges! My speed, endurance, and drive to maintain is constantly growing with each turn of the pedal.
Posted by kelley 1 comment: 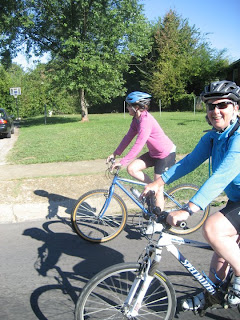 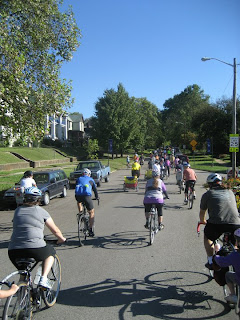 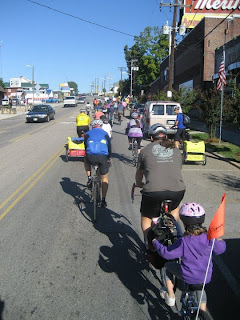 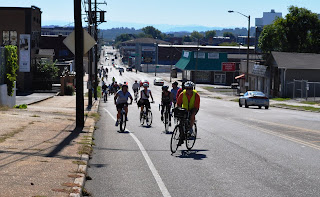 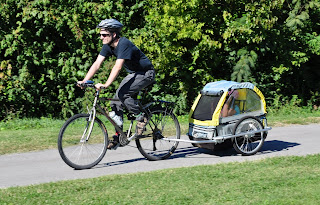 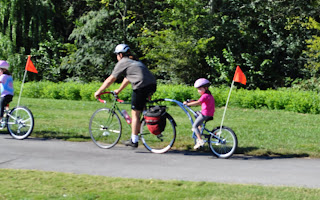 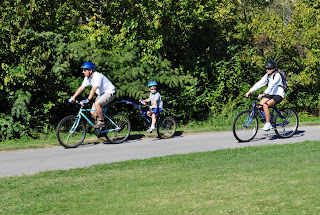 The starting line up! 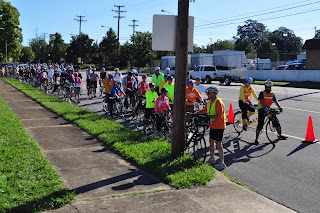 Thanks to Jim Hagerman and Luke Grieve for great photos!
Posted by kelley No comments: 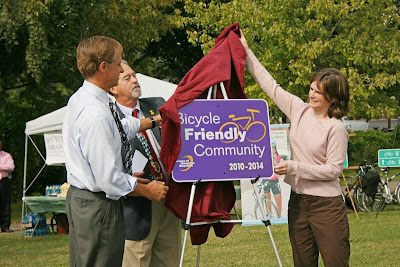 Mayor Bill Haslam helped unveil a sign announcing that Knoxville is a "Bicycle Friendly Community" and officially accepted that designation from the League of American Bicyclists during a Tuesday morning ceremony in Tyson Park. Haslam joined Mike Nix, a member of the League's Board of Directors, and Kelley Segars, with the Knoxville Regional Transportation Planning Organization, to unveil the sign from the bicycling group that that will be posted in the city. Segars and the TPO led the city's effort to earn the hard-to-get recognition. Cities earn the designation by taking steps - in areas ranging from engineering and education to enforcement, encouragement and evaluation - to welcome bicyclists by providing a safe environment for riders and encouraging people to bike for transportation and recreation. Haslam said Knoxville has made significant efforts to encourage people to ride and to increase bicycling opportunities in recent years and is committed to continuing those efforts in the future.
Posted by kelley No comments: