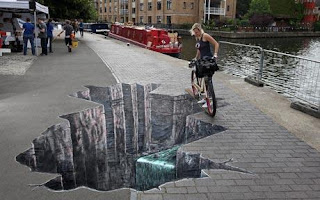 Great way to slow down bicyclists who go too fast on the greenways!
>>>> from the London Telegraph, June 18, 2009
Cyclists were encouraged to slow down thanks to this crater-sized "hole" in the middle of a towpath. But the hole is an optical illusion, a three-dimensional drawing of a canyon, in an attempt to make careless cyclists hit the brakes rather than ride dangerously and ignore pedestrians.

The pavement art, the work of Joe Hill and Max Lowry, who specialise in three-dimensional images, was commissioned by British Waterways and was installed along the Regent's Canal towpath in Islington, North London.

Playing devil's advocate, can the illusion cause panic stops and bike crashes? After all, trying to stop too abruptly can cause one to go over the handlebars.